Mark is a session drummer in the UK with many years of gigging and studio experience and his flexible skills mean he is comfortable in all styles of music but preferring jazz and funk fusions.

Mark has been an endorsee of Impression Cymbals since 2011 and his current setup includes 14″ Jazz Hats, 17″ Jazz Crash, 18″ Rock Crash and 20″ Traditional Ride.

Mark says,“Out of all of the Handmade Turkish Cymbals available on the market today Impression are truly the most versatile. They never let me down in either the Studio or Live show. I’m really proud to be associated with this brand”

JJ Wheeler is a London-based Drummer, Composer and Educator. Having graduated from the Royal Academy of Music with DipRam (Distinction) Honours from the Master of Arts course and a 1st Class BMus (Hons) Degree from Birmingham Conservatoire, he performs regularly in around the UK and abroad, both as band-leader and sideman.

“It’s a bit of a funny market as there tend to be a lot of divisions within the music, but I reckon Impression cymbals could certainly become a strong player on the scene here, especially with the two ‘Jazz’ ranges seemingly being the top-of-the-pile ranges.”

Virgil started his musical career at 4 years old, following in the footsteps of his father guitarist Steve Howe of the band Yes. A talented musician, Virgil has played the Synthesizer, Piano and Keyboards before moving onto the Drums 17 years ago. Since then Virgil has played with a variety of groups, including Little Barrie, Amorphous Androgynous, Shawn Lee, The Dirty Feel and The Killer Meters. He has also been involved in sessions, gigs and videos with Bryan Ferry, The Pet Shop Boys, Gabriel, Annie Lennox and Yusef Islam. Virgil also has his own one-man show where he plays drums over his own productions with special guest musicians and vocalists joining him.

Virgil says, “…they sound great. I need something that would cut through live, but also not be too bright in the studio. I found the Traditionals bridged that gap perfectly. Also I’m a big fan of the guarantee, as I’m known to hit them pretty hard!”

An accomplished drummer who has recorded and played live with artists including Pee Wee Ellis (James Brown), Jean Toussante, Dave Newton, Lizzie Deane and James Morton, among others.

“I’ve been loving my Impression cymbals – they sound great live and so bright in the demos we’ve been recording for the next album.”

Chris taught himself to play the drums at age 16 learning by listening and watching others and specialises in various styles of rock and metal.  Some of Chris’ musical influences include; Metallica, Avenged Sevenfold, Trivium, Killswitch Engage, Haelstorm and Motley Crue.  In August 2015 Chris joined Broken Jaw, a Gloucestershire based Metal/Punk band.

Broken Jaw formed in 2012 and perform at venues across the country.  2016 saw the band perform debut shows in Ireland and also released a new single.  Broken jaw have taken the stage alongside such bands as Breed77 and have played at O2 academies, Bristol Bierkeller, Wolverhampton Slade Rooms, and Camden Barfly amongst many others.

Chris says about Impression Cymbals: “I believe in value for money and I think you would be hard pushed to find a better quality cymbal for the price you pay for Impression.  I love the brilliant finish on the rock cymbals and they produce such a great tone and can be heard clearly in most venues we play without the need for overhead microphones. I opted for the rock cymbal as I am a hard hitter and these cymbals are able to take the abuse and sound great”

Sophie has been a member of Kieland Ridge since 2010, playing the drums and as a singer/songwriter. They describe their lyrics as poignant and powerful while providing an insight into real life experiences.

Sophie says, “I like them because the Illuminati’s have a distinct sound as they are made with two textures, giving brilliant clarity and diversity, particularly on the Hi Hats. The Rock range provides a lovely definition, especially on the Ride which also has a great bell! Both ranges are brightly toned, which compliment each other well and are perfect for what I play.”

Daniel J Logan has worked full-time as a session drummer, producer and recording/mix engineer for 11 years. He has been lucky to have worked with a number of high profile artists including Thea Gilmore (with whom he has been A-listed on BBC Radio 2 across all 3 albums he has played on), Jackie Trent (the late songwriter and former no.1 singles artist), Sam Hollyman (of The Voice UK), and the famous Michael Buble hit. As well as other up and coming artists such as Alx Green, and the award-winning Ashley Fayth.

He mostly plays a hybrid percussion/ drum kit and uses Impression 13″ Jazz Hi-Hats, a 20″ Jazz Ride and a 16″ Traditional China.

Tom Evers-King has been playing drums for just over 15 years and is the drummer for metalcore outfit ‘ Moorhaven ‘ for fans of: Fit for a king, August Burns Red, Parkway Drive, Killswitch Engage. Whilst touring with the group over in Finland, Tom first discovered Impression Cymbals through the band they had been touring with ‘ What awaits us’. They kindly let Tom have a blast using them and he was instantly sold.

Tom says, “I use the illuminati range and also select cymbals from the rock range, these cymbals are me all over, the trash i get from the crashes are just perfect”.

Rory is the drummer for Rollingexile and also is an upcoming session drummer.

Rory first started playing the drums at the age of 7. His love of music continued throughout school, where he went on to obtain a BTec in Music Performance (drums). Alongside his band commitments, he is also furthering his musical knowledge studying for a music degree at the Acadamy of Contemporary Music in London.

Rory has taught drums, and has played with a number of bands across many genres throughout his musical career. His current band Rollingexile have played across Europe and the US.

Ken currently plays with the “Chords UK” and has many years of experience playing live, studio recording and sessions for various artists. Ken has many chops and grooves in his bag and enjoys playing all styles of music.

Ken says “ I have been a user of Zildjian K’s for many years until fellow drummer Mark Claydon introduced me to the range of Impression cymbals. I have found them very musical and fit perfectly with the current styles of my playing, a real quality product”

Jason Smith – Drummer for Sister Suzie and The Right Band, Session and Clinician 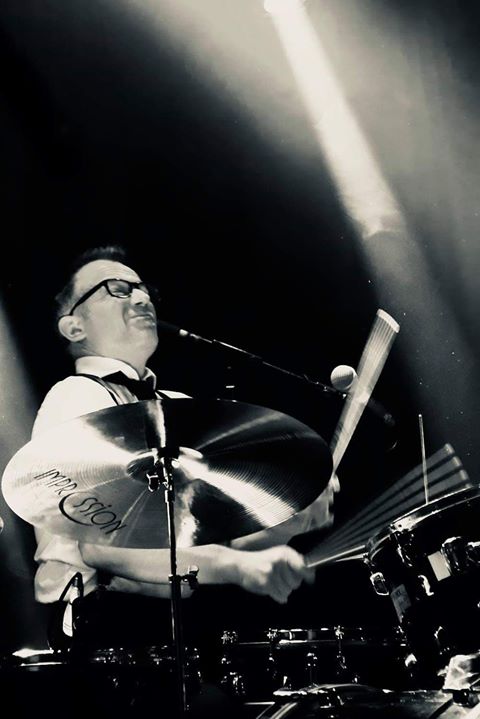 Jason is the current permanent drummer on tour and in the studio with Sister Suzie and The Right Band… bringing him back to where his musical journey really started… with his unique blend of energetic, cool groove and soulful Swingin’ Rhythm and Blues.

Jason’s musical journey on the drumset started around the age of eight years old with snare drum and the rudiments and a very classical attitude. In Secondary School he was quickly developing a unique style and voice with a blend of solid and soulful expressive Big Band and Swing Jazz performances and a real interest in Electronic and Pop… this is clear to see in his musical performance with his personal approach to the instruments.

Jason has recorded and performed live with artists and bands across all genres. Performing live at festivals, theatres, clubs and also held residences in the UK and Europe. Most recent live credits with recording artists include: Jemima Price, Gail Edmunds, Sam Calver and he regularly appears with his own Swing Blues Quartet.

He spent part of his career performing on the main stage arena as a product demonstrator and an endorsed artist on clinic tours and educational sessions at National Music Shows and Events.

A consummate professional and an extremely adaptive and musically intuitive player who loves to improvise. To Jason it’s all about the harmony between a musical relationship with the artist, band, melody and song writing and the instrument… The perfect pairing!

Karl started his career in music with 90s grunge metal band Vivid at 15 years old, playing local music halls and London venues. Karl moved on to acid jazz-trance -funk outfit “More Water” in the mid 90s and again, toured the U.K. A chance audition for Folk Blues artist Ben Markus introduced Karl to Hammond player Dean Rees. Dean and Karl collaborated to create Sweet Felicity Arkwright, a soul-funk outfit. During this period in the early 2000’s, Dean and Karl were invited to complete what was to be the final line up for Greg Ridley, of 70’s supergroup Humble Pie. After a short period with the band, Greg sadly passed away. A tribute show was organised for Greg in London at which Mr Del Bromham of STRAY was invited to play as part of the Greg Ridley Band. Del was looking to put a new line up of STRAY together at the time, the rest is history.

Karl has been the regular drummer for Del and STRAY for the last 15 years or so and tours internationally with STRAY and Del to this day. Karl’s session work includes recordings with Bernie Marsden (Whitesnake), Toby Marriott (the great Steve Marriott’s son), Grief Society and The Markus Band to name but a few. Live session work includes: Dave Cattermole Long John and the Blues Collective The Marshall Amplification band with Chris George Pearl Handled Revolver… plus many more. Karl’s groove but hard hitting style has enabled him to be involved in multiple musical genres which demand a versatile sound and feel.

IMPRESSION cymbals provide the diversity and quality Karl needs to get the job done.